I am bored with everything.

No, wait. I'm not bored, thats the wrong term. I'm...apathetic to everything.

And I don't know why.

I haven't been over exerting myself like usual. In fact, the only things I've been doing have been money related - going to work and tutoring. That hardly fills my days.
I've been turning down social invites. I've stopped writing. I don't even cook anymore.

All I want to do is sit on my bed, listen to classical music and read.

Why was I never asked to join a band???

I mean, I can sing (classically trained), I have stage presence and I...rock.

And yet, the only thing I have been asked has been to be was the manager.

So, I was feeling pretty lonely tonight, lonely enough to try out Tindr (again). I came onto LJ to blog about this, then I came across a post about

ethrosdemon / Kassie and my heart broke into a thousand pieces.

For those of you who don't know, about 8 years ago, Kassie wrote an epic in the bandom arena - Bandpires. It set the bar of everything I'd ever want to read ever again. And not just that, her musings were always insightful, amusing and dead on. She is another LJ friend I have lost and it hurts. It really hurts.

I am going to miss her.

If you want to read her stuff - head over to my memories for the tag - I want to live forever.

So, after my little self indulgent existential crisis last night, I woke up feeling better. Despite this weird muscle spasm that has taken hold of my right shoulder and neck, but that's being medicated and massaged into submission.
Anyway, I am feeling better. Not hundreds, but still, not as low.

But then, I get a voice message from my best friend and he wasn't in any better shape than I was. We're half a world away from eachother and it's really highlighting how much we need eachother in our lives. I wish I had the cash to buy him a plane ticket to come visit me, but I had to pay tuition so I'm broke AF (I blame Buzzfeed for the use of AF in my life).

I also saw the news that Hiddleswift is over. I'm kinda happy about it and a little smug about it as I had a feeling it would implode. Although based on the news, the Swift PR camp is earning their money and making Tom the bad guy. This makes me upset. And it also makes me realise I am far too invested in other peoples lives when my own needs some serious TLC.

Which starts with joining a Zumba class.

According to science, I only have 12% of my eggs left. And those that are left will be less than perfect.
This saddens me.

And after 3 years, I am still alone.

I'm okay with being alone in general, but I find my moments of Bridget Jonesing happen more and more often.

I was accused of being bitter. I prefer the term - realist. I know what I look like to the world, and I know I am not an eligible young sprite. I have seen wars. I have lived through a lot. My body shows it. My body feels it.

My mind is a whirl with a thousand different thoughts that not even meditation can calm and quell.

The world should be my oyster yet I am not gulping it down. I am not going out and living it. I don't see the point really. Everyone says go on adventures, but I turn down invitations. I turn away from gatherings. Because I know I shall not enjoy them. I know the kind of people I'll meet.

And I am bored out of my mind.

Now, if you've read my fics, you know I like to keep them light and funny with a touch of darkness. But never, have I ever written something with the purpose of triggering things in people. And apparently that's what happened when I received this comment from a reader on AO3:

"She rapes him. Various times. Deceives him to have sex with her pretending she's someone else, stalks him to the coffee shop and his house, then has the n.e.r.v.e to call him a bully and still gets a happy ending? Wow."

I need a little help responding to her as I don't want her comments to go unacknowledged, but I also don't want a shitstorm in the comment section.

I have been forced to buy clothes off the internet because I outsize the average Thai person by a lot - I'm not obese, just buxom. (UK size 14/16)

And because I haven't bought any clothes in two years, I needed some new items. The first was a new bra or two. Now thats an exercise in depressing me. I have a big size that is super expensive - Never spent so much time just searching for a bra that wouldn't bankrupt me.
Then there were the shoes I had to get as its frowned upon for teachers to wear trainers to school.
And then there's the shirt situation.
Urgh.
I'm gonna need therapy for all this shopping.

While other people out there are saying yes to everything, I need to start to say no.

I offered to help a friend out by covering a class this afternoon. I was keen to do it. The money didn't hurt either.

But my body decided to make life difficult for me - or it may have been that 7/11 tuna sandwich I devoured after the show last night.

Anyway, I have been sick the whole morning. I texted the woman with the job as soon as I could to let her know I couldn't come in. I sent word out amongst the teacher community about the job to find a replacement.
Nothing.

And now my friend is super pissed at me for flaking on him.

And now I'm annoyed at myself for being forced into feeling like shit.

And the thing is, I love to help out. I really, really do. I will bend over backwards to help you with anything you ask. I will give you the shirt off my back. And it has bitten me in the ass a few times.

So, I think for the sake of my sanity, I will no longer offer to do anything or help anyone ever again.
They say the road to hell is paved with good intentions. I never really got it until now. Well, no more. Seriously. No More.

So, I found some acting companies here in Bangkok.

In April, I did a production of Up Pompeii with BCT - amateur bawdiness - It was awesome.

And now, I am doing a proper, professional production with Culture Collective.

It has been one of the most interesting experiences of my life. I'm learning to act in a whole new way now, and the pressure to perform is on. 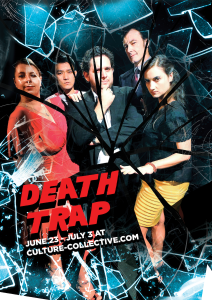 Oh dear, my brain has turned into a sieve.

I forgot about an important meeting yesterday and I realised I signed up for a fest and now i can't remember why or what my prompt was.

I think its because the past month has been a rollercoaster. End of school pressure, then my mate moving in with me for the month and my week long break to a tropical beach where I read a dozen books.

I'm on holiday until May. Oh dear.

So, you guys recall that woman I worked for in Mozambique who went out of her way to make my life hell for the 18 months I was there?

Remember how the stress of that as well as losing my fiance resulted in me having PTSD?

And then I moved to Bangkok to try a new thing in my life with less stress?

Yeah, well, my new job that I was really enjoying at my new school has managed to become awful because my co-ordinator / direct supervisor is a cloned copy of my previous boss.

I get palpitations every time I see a message from her or sit in a meeting with her. I panic about the smallest things because I can't seem to do them exactly as she wants because my kids haven't been trained like hers.

And she doesn't have a sense of humour.

Now, my last strategy was to be employee of the month. I am changing that to be the invisible employee of the month.
And i'm going to ask for a transfer to the high school section. It was recommended to me by another teacher who says its far less work than primary and no bitch supervisor, AND drama department needs a supervising teacher.

I'm tired of having women like that in my life. I can't handle the anxiety, especially when I can't afford to medicate it.

So I'm on a mental health day today and will return to school tomorrow with a can do attitude and smile. Just not today. Today I may make small children cry.
Collapse